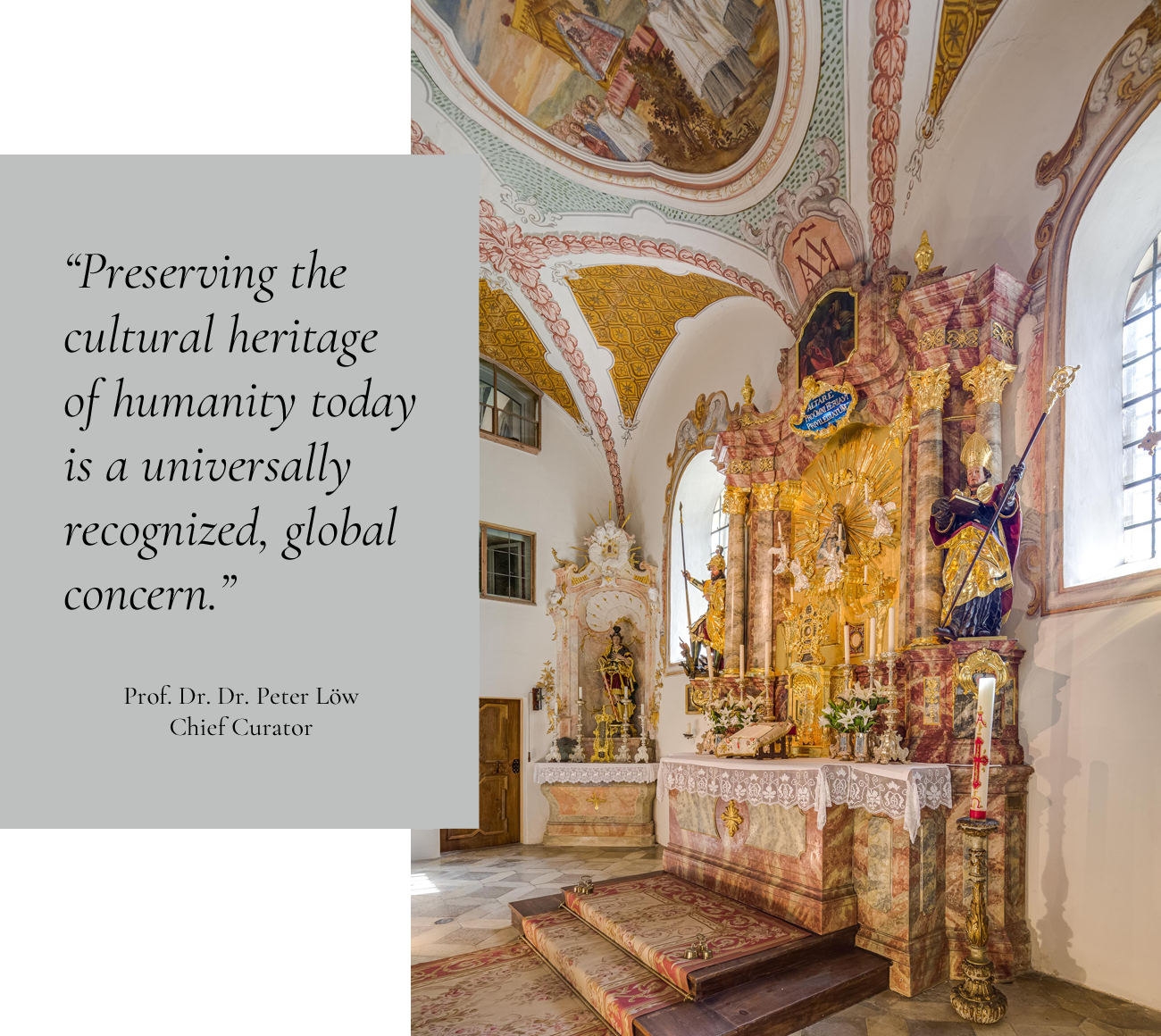 UNESCO formulates the importance of the cultural heritage as follows:

This puts the preservation of cultural heritage on par with projects such as the fight against poverty, the maintenance of peace and the creation of global equal opportunities. But also in meeting these requirements, it is important to consider the requirements. For example, historical monuments and socially defining architectural focal points have been abandoned to decay worldwide. And it was removed from the architectural memory. And what was once removed from the architectural memory also leaves a trace of historical oblivion in the minds of the people.

The European Heritage Project has set itself the task of making its own contribution in this context. In particular, historically unique monuments that shape their region over centuries, but have been neglected over time and are often at the mercy of complete decay, are to be preserved for future generations.  With high scientific effort, with tireless patience and last but not least with considerable financial expenditure The European Heritage Project wants to make these monuments again what they always were: For castles, palaces, monasteries, palaces, estates or historic urban ensembles not only reflected the pride of their time and thus stood for the historical self-understanding of the people they were attached to, but were and still are the identification points of the cultural self-location of the people living there today. Giving people access to the “lighthouses” of their ancestors again is not a nostalgic aspect of museum curiosity, but an active contribution to the preservation of historical memory.
This is the aim of The European Heritage Project.Finally, concentrating on the European aspect has nothing to do with local arrogance, but is due above all to the size of the project and the need for a regional focus. However, global ideas such as those of human rights, ethics, democracy, science and research certainly have their origins in the Graeco-Roman school of thought and Christian doctrine, ideas that were intensively discussed in Europe and later received and applied worldwide even if their historical roots are often forgotten. It is therefore the European architectural monuments that accompanied these processes and made them possible either through their design and function or as a result of these processes.Preserving these stone witnesses is therefore also a contribution to the history of global ideas. 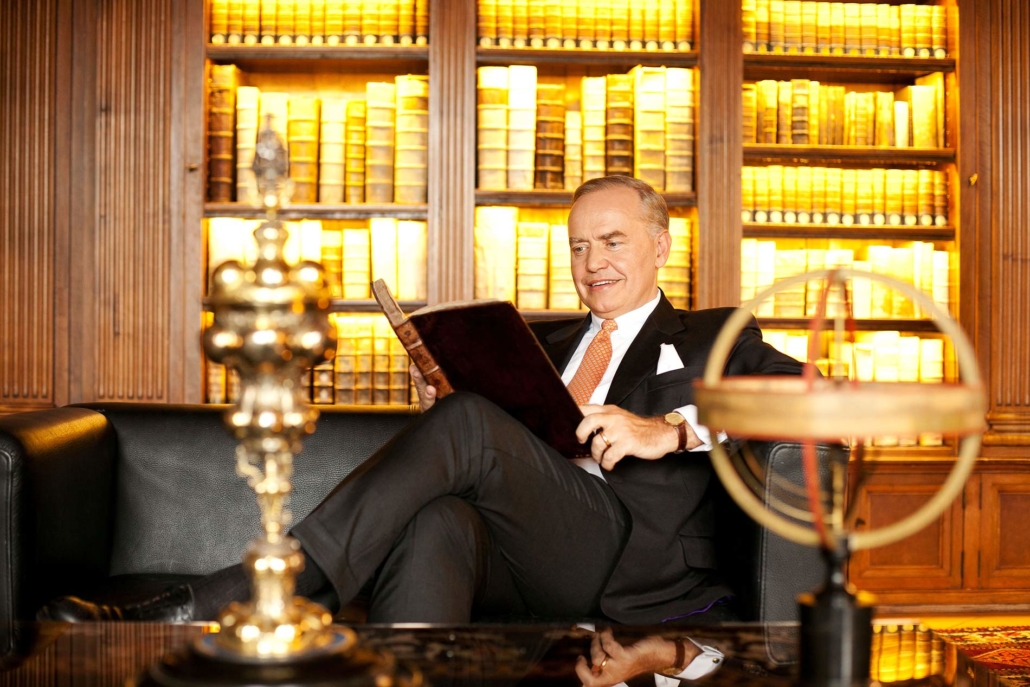 Peter Löw is the driving force behind the European Heritage Project. It is thanks to his courtesy, personal dedication, expertise and due in no small part to his financial commitment that this transnational project became possible by any means.

At the mere age of 16, Peter Löw secured a secondary income as a student assistant to a renowned conservator in Baden-Baden, where he learned the craft of historically accurate restorations from scratch.
His mother, who had studied fine arts in Munich, encouraged his interest in the politically relevant, early on, and also fostered his appreciation for the beauty of old things.

Not until the age of 33, and not before having completed his diverse studies, did he initiate his economic career. After having worked as a consultant at McKinsey, he acquired his first small business financed from his own resources at the age of 35. Without external help, he succeeded in becoming one of the most well-known and successful global investors in the restructuring sector. He was able to acquire and realign more than 250 companies around the world in this way.

He successfully accomplished several IPOs. Many of these companies were able to eventually meet listing requirements for stock market indexes, such as SDAX, TEKDAX and MDAX and under his management.

However, Peter Löw is also one of the few entrepreneurs who does not focus exclusively on entrepreneurship but one who also demonstrates competencies in all socially relevant areas, thereby following the historical ideal of active citizenship and the tradition of the deeply committed Bildungsbürger, or intellectual bourgeois. Löw is not only a high-ranked officer of the Bundeswehr, but also a teaching professor and member of the Senate at the Papal College Heiligenkreuz. He received insights into diplomatic service and international customs as assessor to the German Embassy in Rome. From 2005 to 2010, he was also active as a consultant for the UNESCO. Over a course of more than 10 years he chaired charitable activities of the Malteser Hilfsdienst as an honorary representative, until 2014. Since 2012 he is regularly leading Interfaith dialogues in the Monastic Republic of Athos. Between 2002 and 2004 he was also instrumental in reconstructing the papal nunciature in Belgrade. Furthermore, he enabled the organization of the Pope’s visit to Germany in 2011.

Peter Löw is a marathon runner, combat survival training competitor, parachutist, lifeguard and diver. In 2015, he survived the crash of his plane in Miami as a pilot.

His emphasis lies in an interdisciplinary nexus. In this spirit, he has published numerous books on various scientific topics and is currently working with an interdenominational working group on a new Qur’an translation, in the wake of his lecture series at Heiligenkreuz.

Peter Löw owns one of the most important art collections on the continent, including artifacts from all epochs of humanity; with numerous exhibits enriching public exhibitions all over Europe.

He has proven his affinity to European heritage repeatedly. Peter Löw is not only fluent in English, French, Spanish, Italian, and holder of the Latin proficiency certificate, but he has worked in or owned companies in almost every European country.

His international social commitment has already been recognized several times, as a professing Catholic and papal knight in the rank of Grand Cross carrier he is close to the Vatican.

Löw is married and father of six children.

Curators of the project are responsible for the operational implementation of the respective Heritage projects.

The task of the High Council is to assist in the identification and implementation of individual projects and to establish contact with governments and authorities. The work is voluntary and is carried out at joint meetings. Qualified for the membership are personalities, who occupy an outstanding position due to their experience and activity and to whom the preservation of the European Heritage is a matter of the heart.

This site uses cookies. By continuing to browse the site, you are agreeing to our use of cookies.

We may request cookies to be set on your device. We use cookies to let us know when you visit our websites, how you interact with us, to enrich your user experience, and to customize your relationship with our website.

Click on the different category headings to find out more. You can also change some of your preferences. Note that blocking some types of cookies may impact your experience on our websites and the services we are able to offer.

These cookies are strictly necessary to provide you with services available through our website and to use some of its features.

Because these cookies are strictly necessary to deliver the website, you cannot refuse them without impacting how our site functions. You can block or delete them by changing your browser settings and force blocking all cookies on this website.

We also use different external services like Google Webfonts, Google Maps and external Video providers. Since these providers may collect personal data like your IP address we allow you to block them here. Please be aware that this might heavily reduce the functionality and appearance of our site. Changes will take effect once you reload the page.